OUR popular mini-series returns during the close season as colerainefc.com recalls former Ajax manager Danny Blind playing at The Showgrounds for Sparta Rotterdam in 1983…

For the ninth issue, we remember defender Danny Blind who faced the Bannsiders in the UEFA Cup with Sparta Rotterdam in September 1983. The centre-back played the majority of his career with the Castle Lords but transferred to Ajax in 1986, where he won a host of medals.

Blind is the only second Dutch player to have won all pre-1999 UEFA club competitions and is the father of former Manchester United defender Daley Blind, who spent four years at Old Trafford. At the end of his playing career, Blind would manage Ajax and Netherlands, as well as taking up numerous positions elsewhere. 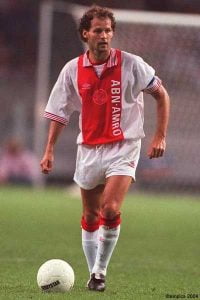 Danny Blind was born on August 1, 1961, in Oost-Souburg and made his professional debut at the start of the 1979/80 season for Sparta Rotterdam. After 165 appearances for the club across seven seasons for Sparta, he joined Ajax under the management of Johan Cruyff in July 1986.

It is reported that Ajax talisman Marco van Basten was upset that his manager brought in a relatively unknown, defensive player from Sparta, instead of splashing out on a big-money and big-name transfer.

However, those doubts would be quickly put to bed as he amassed an impressive trophy list, winning all three European trophies (UEFA Cup Winners’ Cup in 1987, the UEFA Cup in 1992 and the Champions League in 1995). Furthermore, he secured the Intercontinental Cup in 1985 against Gremio by scoring the winning spot kick in the penalty shoot-out.

A reliance from the spot would prove to be key for Blind again as he converted twice from the spot against Real Zaragoza in the European Super Cup final in 1995, as Ajax won 5-1 over two legs. 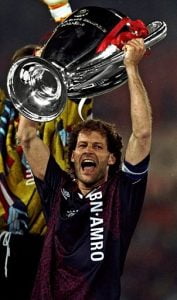 making his debut against Scotland in 1986. The defender was not part of the triumphant Euro 1988 side, however, he appeared at two World Cups and two European Championships.

A domestic honours list would see Blind secure five Dutch Eredivisie Championships, four KNVB Cups and the Johan Cruyff Shield in 1993 and 1994. He was also the winner of the Dutch Golden Shoe in 1995 and 1996.

Blind retired from playing in 1999 and was known for being a solid, dependable defender and a leader on the field. However, he was also a technically gifted and cultured player who could pass and strike the ball well for a non-attacking player. Whilst being famous for a centre-back, Blind started his career as a right-back.

A trip into management would see Blind appointed as head coach of Ajax from March 2005 until May 2006. A spell of 422 days in charge would see him lead Ajax to victory in the KNVB Cup and the Johan Cruyff Shield. 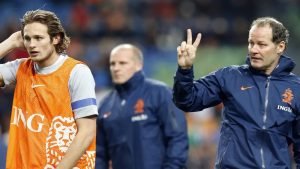 Blind became football director at Sparta Rotterdam for a spell, before carrying out the same role at Ajax for a year. In July 2015, Blind was named as Guud Hiddink’s successor as manager of the Netherlands but failed to lead them to Euro 2016 and was sacked in March 2017 as qualification for the 2018 World Cup was at stake.

However, in August 2021, Blind would return to the Dutch national team as he is an assistant coach to Louis Van Gaal, who also played in the fixture for Sparta Rotterdam in 1983.

The match was played on Wednesday, September 28, 1983 as Coleraine hosted the second leg of their UEFA Cup tie. The Bannsiders had lost the first leg 4-0 two weeks prior to the Dutch side coming to the North Coast.

Sparta coach Bert Jacobs hit out at Coleraine’s lack of attacking flair after his team were held to a draw in this lifeless UEFA Cup tie.

“I was very disappointed with the way they played. I expected more attack but it seemed that they were content to hold us.

“This must have been a very frustrating game for the spectators. Coleraine only had one shot in the first-half. We expected them to come at us after losing 4-0 in the first leg,” said Jacobs after the game.

The Dutch manager singled out striker Raymond McCoy as the best Coleraine Player but added that he was given little or no assistance from his colleagues. That was indeed a fair summary of the match. There was absolutely nothing in the way of excitement until Irish International Felix Healy pushed home a 63rd minute goal to cancel out Wout Holverda’s effort for the visitors 12 minutes earlier.

As a contest, the tie was over for the Irish League part-timers after that 4-0 drubbing in Rotterdam a fortnight ago. There was no way back for Tony Curley’s team. Curley himself was satisfied with the outcome on Wednesday afternoon although most of the 1,500 crowd who turned up will find that hard to believe!

“It all hinged on the first leg. If we had played as well out there as we did at home then we might have had a chance. They played us tight and we couldn’t get it going up front. I was quite happy with our performance,” he commented afterwards.

Sparta were really only going through the motions. They might have taken the lead as early as the seventh minute when an error by defender Eugene McNutt let Holverda in but his tame shot was easily dealt with by ‘keeper Vincent Magee. Livewire McCoy sparkled the whole way through and at times the big Dutch defenders found him almost too much to handle. It was McCoy who carved out an opening for Kevin Mahon in the 27th minute. He pushed a pass through the Sparta rearguar and Mahon ran on to it and rattled the ball against the bar with ‘keeper Bas van Moortwijk beaten.

Ten minutes later it was Mahon jinking past two defenders and crossing the ball into the goalmouth but McCoy just failed to make contact. Van Moortwijk was furious that his defenders had permitted the striker so much room inside the box.

The Sparta goal came out of the blue with Holverda squeezing a shot past Magee after Rene Eyer’s cross from the left had caught Coleraine cold.

On the hour Pat Mullan came on to replace Gerry O’Kane and three minutes later his short corner on the right wing led to the equaliser. Healy took control, outpaced substitute Ron Stevens and squared for McCoy to get in a shot. The ball rebounded off a defender and Healy pounced like lightening to stab it into the net from three yards.

Magee was called on to make a useful stop from Ron Lengkeek soon after but he was beaten in the 67th minute when the striker got in a glancing header. Fortunately, the ball was scrambled off the line and Coleraine survived.

In the dying minutes Roy McCreadie hammered a 25 yard drive over the bar as Coleraine staged a late rally. Ray Henry took over from Healy with eight minutes remaining but it was too late for him to make an impression and the game drifted on to its inevitable conclusion.