IN the continuation of our mini series, colerainefc.com’s Jonathan McNabb delves into the archives to remind supporters of great names who have graced the turf on the Ballycastle Road…

For the sixth issue, we remember goalkeeper Ray Clemence who faced Coleraine in a European Cup Winners’ Cup first round tie back in 1982. He is one of only 25 players to have made over 1,000 career appearances and won three European Cups during his time at Liverpool.

Ray Clemence is without doubt the greatest goalkeeper ever to play for Liverpool.

Not only that, he was arguably the finest stopper in Europe throughout the 1970s and early 1980s, a period in which Liverpool won five league titles and three European Cups.

In his vivid green goalkeeping top, Clemence became an Anfield institution and will go down as one of the shrewdest transfer bargains in football history.

Signed from Scunthorpe for £18,000 during the summer of 1967, he served his Kop apprenticeship in the Central League before replacing Tommy Lawrence on a permanent basis during the 1969-70 campaign. 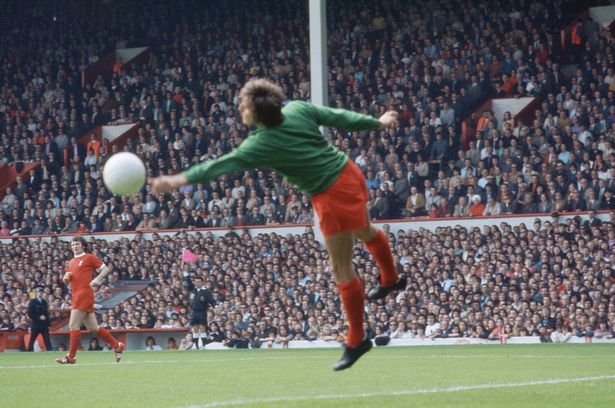 The successful UEFA Cup campaigns of 1972-73 and 1975-76 provided two notable examples of Clemence at his best, as he denied both Borussia Moenchengladbach and Dynamo Dresden with exceptional penalty saves.

Having helped Paisley conquer Europe, he was in no small way responsible for taking the side’s domestic domination to unprecedented heights in 1978-79, conceding a mere 16 goals during a 42-match league programme.

Little did the Kop know that Clemence’s time on Merseyside was coming to an end. It was on the eve of the 1981-82 season that the Skegness-born shot-stopper announced he was leaving for Tottenham.

His last act in a Liverpool shirt was to shut-out the Real Madrid attack in Paris as a third European Cup triumph was secured – a fitting end to an Anfield career of such distinction.

During his 11 years in the first team he missed just six league matches, won every major honour in the game apart from the European Cup Winners’ Cup and displayed a level of consistency that no Reds’ keeper has since been able to match. 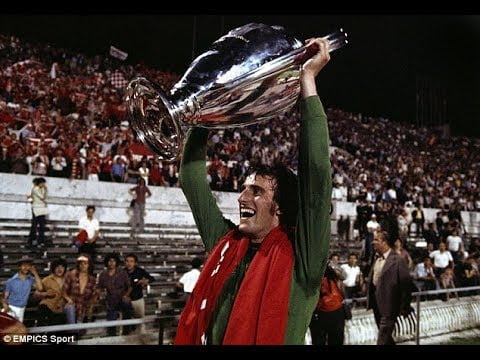 Spurs won the UEFA Cup in 1984. Clemence missed the final against Anderlecht through injury, but was on the bench as substitute goalkeeper in a match famously won when Tony Parks saved twice during the penalty shootout. Clemence reached a fifth F.A Cup final in 1987, where Spurs lost to Coventry City. He is in a select group of players who have appeared in five or more F.A Cup finals. Clemence sustained an Achilles tendon injury in Tottenham’s away match at Norwich in October 1987, which forced his retirement from playing in 1988.

More than 10,000 fans packed Ballycastle Road Showgrounds on Wednesday afternoon to see Colerainé lose their European Cup Winners’ Cup first round tie with Tottenham Hotspur by three goals to nil, but the Irish League part-timers were far from disgraced. Des Dickson was delighted with the result and pointed out after the match: “We were expected to be hammered by a big score but the lads played the game of their lives. They were a credit to the club.”

The Coleraine defence proved a tough obstacle to Spurs’ front-runners Steve Archibald and Garth Crooks, although both men got their names on the score-sheet – Crooks managing to beat ‘keeper Vincent Magee twice in the second half. The spectators were given value for money. 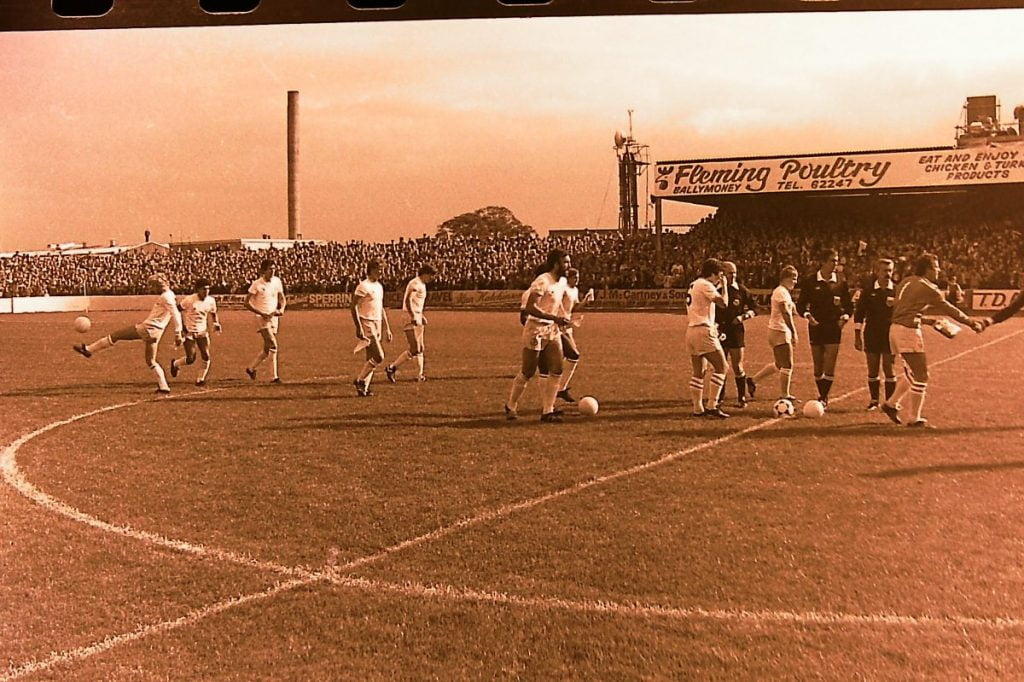 Spurs controlled the proceedings but were made to fight every inch of the way by a gutsy home side that refused to play defensively and created a number of goal-scoring chances despite the strength of the Tottenham back four of Chris Hughton, Paul Price, John Lacy and Garry Brooke. Lacy, in particular, stamped his authority on the game, but there were times when Coleraine posed problems.

However, nobody managed to beat English international goalkeeper Ray Clemence but he was called on to make several saves throughout. It took Spurs only 12 minutes to break the ice. Magee looked set to make a name for himself with two stops from Crooks early on, but he failed to cut out a right-wing cross from Brooke and Gary Mabbutt squeezed a header past him and on to the post. The ball rebounded sideways, presenting Archibald the easiest of opportunities to turn it over the line.

At that stage a lesser side might have folded but Coleraine came bouncing back and Felix Healy earned roars of approval from the crowd when he breezed past two defenders and rattled in a 25-yard drive which forced a brilliant reaction from Clemence, who turned the ball round the post. Ricky Villa, the Argentinian whose future at White Hart Lane was threatened for a spell during the Falklands crisis, made his mark. He set up a chance for Mabbutt who headed his free-kick wide. Villa was later presented with a ‘gift’ by the home defence but could only send his parting shot over the bar.

At the other end, Des Dickson, returning to the Coleraine line-up after missing the last three domestic games through injury, caught the Spurs rearguard lapsing and pounced on a Healy free, only to blast the ball off target with a first time effort. Clemence demonstrated his cool nerve in 27 minutes, when a blunder by Lacy let Gerry O’Kane in, but before he had time to realise what was going on, the ‘keeper had raced off his line to smother the danger. Before the interval Magee was in the action again, producing saves from Brooke and Crooks as Spurs pressed for that elusive second goal.

It finally came in the 49th minute and was well worth waiting for. Brooke worked his way down the right and crossed for Crooks to outjump the defence and power a bullet-like header into the net. It was a simple move but Crooks’ finishing was deadly.

The F.A. Cup holders enjoyed supremacy after that but Burkinshaw’s frustration was clearly evident when twice he left the dugout to urge Crooks to move forward into the penalty area in search of goals. His pleas fell on stony ground for Coleraine rallied to put up a spirited performance in the closing stages. Dickson came off 20 minutes from the end and gave Londoner Mark Allan his first taste of European action.

But as Spurs pressed it was big John Shannon who continued to shine with some fine tackling which denied the eager Crooks. Magee was again the ‘spoiler” of another well-worked Crooks-Archibald move in the 74th minute, and two minutes later he somehow turned away a Lacy header which looked destined for the net. 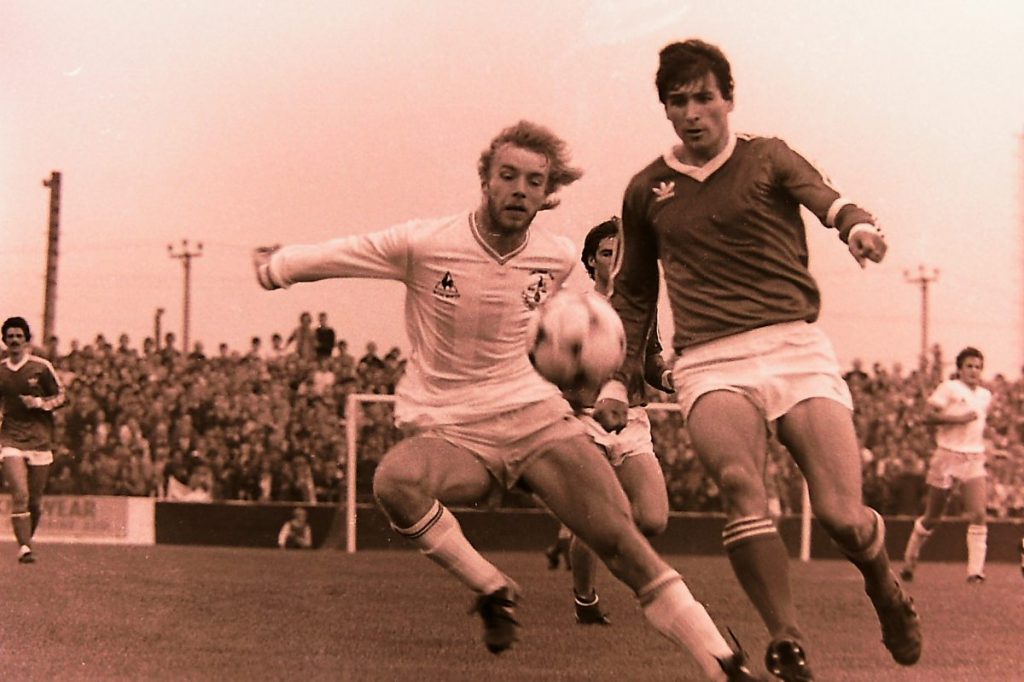 Roy McCreadie, who last season was playing reserve football, got his chance to get involved in the big occasion when he replaced the hardworking Raymond Henry with seven minutes left on the stopwatch. He was only on the field a minute when Spurs completed the scoring. Galvin’s cross from the left was headed back in front of goal by Archibald and Crooks had the simple job of stroking the ball home after Magee had palmed out a drive from Brooke.

The teams were given a warm reception when the final whistle blew – and deservedly so. Coleraine raised their game and finished up with honour for their efforts. Every player on the side gave maximum effort and can walk tall after a terrific display. The second leg, at White Hart Lane on Tuesday, September 28th, is perhaps only a formality for Spurs, but as Keith Burkinshaw said: “We certainly knew we had been in a match!”