The midfielder has put pen-to-paper on a switch to the Premier League side for an undisclosed fee.

Patrick has been at the club since the age of four and worked his way up the ranks to make his senior debut this year.

The Portstewart native was named in the squad for the Europa Conference League tie against FK Velez Mostar and made his debut against Carrick Rangers on September 4 last year.

Patrick was named Man of the Match on his maiden start against Larne and scored his first goal for the club against Windmill Stars in the Irish Cup.

Speaking to colerainefc.com, Kearney acknowledged how hard Patrick has worked to make his dreams become a reality and his emergence into the first-team squad was a shining light on a difficult 2021/22 campaign.

“There’s no doubting that PK is someone, who for a lot of years that I’ve been around the club, is a name that I’ve known about and has always been on the radar,” he said.

“I think, particularly, COVID was the big changing point where he was a bit similar to Brad Lyons in that there was a huge amount of interest at 11 or 12 years of age, then he possibly didn’t grow at the rate of other people and sadly there’s that thing in football, particularly at that age group where it’s deemed important and career breaking as such.

“For players like PK, Brad and others who have went through that, it’s vitally important that there’s that mental toughness and a mindset there to keep going and not quit.

“Those are qualities which are synonymous with elite players and players who want to get to the top, for example, Brad never quit and he got his rewards for it.

“I think Patrick is exactly the same and I remember pre-COVID the U15 and U16’s trained across from us at the University and there was a couple from that age group that you would have brought up and down, but there were two or three times I was tempted to bring Patrick up, but from a safety point of view he was only 14 or 15 and you were worried he could end up getting hurt.

“When we arrived back after COVID, Patrick was ready to make the step and it was a simple ‘come you with me’ and to be fair from that point onwards he hasn’t looked back.

“From experience, if you bring one or two kids together they just gravitate to each other and don’t make the progress that you would like. There are a lot of things we did methodically to try and push him on quickly and the best credit you can give him is that he responded to it.

“Patrick went straight at it; at the training, at the changing room and at anything from that point of view and probably what wasn’t a memorable season and one that I found really disappointing, I think it’s safe to say that Patrick was the one big, bright spark from last season that I’ll look fondly back on in the years to come.”

Kearney also paid tribute to several members of the first-team squad who helped Patrick integrate into senior football and that they will fondly look on at his development as “proud parents”.

“We are delighted for him, the boys are delighted but you have to give great credit to the players as well. The likes of Lyndon Kane, James McLaughlin and Ian Parkhill car shared with PK and that was an experience for him, but one where he has to grow up quickly and stand on his own two feet,” he added.

“Lyndon has shown qualities beyond his years of leadership and he certainly took Patrick under his wing. I think PK has lived as much at Lyndon’s house on matchdays as he did his own house and I think Patrick would be the first to tell you that people like him made the transition so much smoother and easier.

“I’ve seen it so many times in changing rooms where players see someone like Patrick coming through and they see it as a threat and he’s going to get in my way or he’s going to take my shirt.

“However, to be fair to be our boys, they have really embraced Patrick and have pushed him in a good way. We were sore on him at times when we needed to be and he was treated no different to anybody else, but he responded and grew up along with that.

“For Patrick to get the rewards that he felt he might not possibly get again in his career at 11 or 12 years of age, for a club like West Ham to come calling and a deal that he’s got, people say ‘good things don’t happen to good people’ but they absolutely do for me.

“You couldn’t wish a move like this for anybody better with Patrick’s attitude, humility, everything he brought to the table and as Lyndon said you feel like a proud parent.”

Patrick’s association at Coleraine has spanned almost 13 years and Kearney remarked that his dream move across the water is a testament to all the hard work behind the scenes at all levels of the club.

“It is a testament to all the coaches and everybody at the club during Patrick’s time as he’s been here since soccer school right the whole way through,” he continued.

“You take a big pride in how he has done and he’s been at the club since the age of four and there have been others at times in the last 10 or 15 years who maybe feel that joining a Belfast club is the place to go to get a move, but Patrick was loyal to the club and he’s got his rewards for that.

“It’s not just about us guys who send him off in the final year of it and take all the credit, there’s been over a decade of work that’s gone into him and there’s been a huge amount of people around the area who Patrick would admit have been brilliant with him.

“To all those people involved, the local area and the club, it’s a massive boost in the arm and we look on as a West Ham fan as we take a keen interest and we hope Patrick goes from strength to strength.” 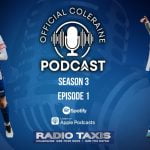 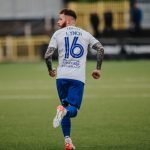 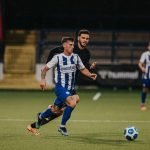