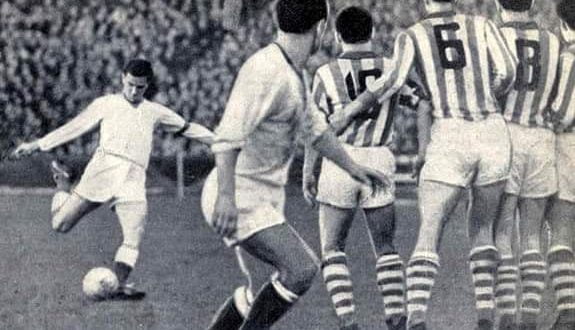 The following piece is taken from the official programme between Coleraine and Tottenham Hotspur in 1982.

The telephone rang. It was the “Telegraph” on the line. I started dictating the story of the game. “They died with their boots on….” and then it went dead.

For hours I waited in the hotel room for the reconnection which never arrived. So for the first-and-only-time in years of football reporting around the world I failed to get the copy through. indeed, it was not until we reached Orly Airport at Paris the following day that contact was restored.

That for me is the haunting memory of Coleraine’s 4-0 defeat by Kiev Dynamo at the National Stadium, Kiev, on September 8, 1965. An occasion, my initial visit to the Soviet Union, of professional crisis but, nevertheless, one of immense interest. A new vista to life had been opened.

Coleraine lost 6-1 to the Russians at the Showgrounds the previous week which meant the return leg was but a mere formality. That, however, was not the way player-manager Bertie Peacock saw it. Reputation was at stake and, although outclassed both in skill and European experience, the Coleraine side turned in a gallant performance before losing 4-0.

The party flew from Belfast to London and then on to Moscow and into another world, With us on the aircraft were a group of British trade unionists in Moscow for a convention. They were greeted with handshakes, bouquets and waiting limousines. At first we thought it was our welcoming party. No such luck. A swarthy little fellow, reminding one of an agent you’d find in a spy novel, came forward; asked for Coleraine’s “chief of delegation” and shook chairman Jack Doherty by the hand. In impeccable English the interpreter said: “We are delighted to have you on Soviet soil. Your meal is ready!”

We marched into the airport restaurant before being driven across the outskirts of Moscow to the domestic terminal and a dilapidated, tawdry Aeroflot plane which took us to Kiev, capital of the Ukraine, an area almost completely rebuilt after the Nazi holocaust of the 1940’s.

My immediate need at Moscow Airport was not, however, a meal but a telephone to inform Belfast we had arrived and to update my story in the earlier editions of the “Telegraph.”

“Any chance of a phone here?” I asked the interpreter, offering him some English cigarettes as a means to an end! “We will see,” he said. “But first I must ask my chief.”

He was of little help. After 10 minutes of consultation between the interpreter, the chief and a sullen uniform clerk behind the desk, I was told: “Sorry but the lines are down. The storm you know.” Yet the sunshine was melting tar on the roadways.

Around the balcony were the offices of the Western airlines. Maybe they could help. I called at every one but, in each case, the employees had gone home.

“We must go now,” said the interpreter, now nicknamed Tojo, as he led the way on to the bus which looked as if it had come out of a Beverly Hillbilly movie. It chugged and rattled past women working on housing estates; in the fields and on the roads. It broke down. Out jumped the driver cursing and swearing in Russian. He lifted the bonnet, hit it a few taps and it roared back into action.

Kiev…a beautiful city. My hopes rose the following morning when Belfast came on the line; over went the copy and I was able to relax in the sunshine for the rest of the day while the Coleraine team trained. The Soviet Union wasn’t so bad after all.

It was the good before the bad. Next day I met a Canadian employed by Radio Kiev. He organised a telephone for me just outside the dressing room so I could get through to Belfast with the first copy. “Moscow has no lines to London,” said the operator.

Calls were due in that night to the hotel for the following day’s paper. The late Billy Irwin, a colleague on the “News Letter,” who shared the room with me, got through after waiting for two hours.

My own was to follow immediately. He put the phone down and it rang. A false alarm. It was only Dr. Love wanting to know if I had any duty free Scotch left.

The phone went again. I started to dictate: “They died with their boots on….”

Depressed, we left for Moscow where I’ll always remember Jack Doherty having a row with the soccer officials about the inability of changing roubles back into sterling. Impossible but luckily Glasgow Celtic went there next season and they used them. Nothing ever goes to waste in Coleraine!