WITH the on-going help of club historian Hunter McClelland, colerainefc.com brings you the latest instalment of the ‘Down Memory Lane’ series as we recap our last win at Mourneview Park in 2017… 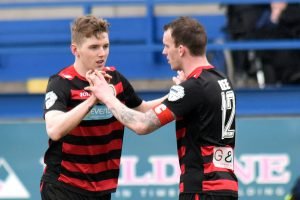 After a promising start from the visitors it was Glenavon that took the lead in the 10th minute. After Andrew Hall’s shot was blocked by Mark Edgar, Rhys Marshall kept the ball alive and fed James Gray on the right of the box. His low shot took a deflection and fell nicely for Joel Cooper who showed great composure to fire in at the far post.

Coleraine were level in the 26th minute when Jamie McGonigle glanced a cross from Adam Mullan beyond the dive of Johnny Tuffey and into the bottom corner.

The second half was barely a minute old when Kelly smashed a shot off the under side of the bar from a Hall corner with James Singleton’s follow up being deflected for a corner.

As Hall prevented a throw in in the Coleraine third it proved to be an advantage to the Bannsiders as the ball was played down the line to Eoin Bradley and he cleverly flicked it inside to release McGonigle and he strode into the box before slotting it past Tuffey for his second goal of the game.

Guy Bates’ cross was played on to Cooper by Gray and the winger’s low shot across the goal went just wide of the far post. Bates himself then headed just over from a near post cross by Hall before having a penalty claim waved away after he was challenged in the box by Steven Douglas.

After Bates was replaced in the 65th minute by Greg Moorhouse a corner from the right delivered by Cooper was met at the near post by a combination of Kris Lindsay and Chris Turner, the header flashing just wide.

With 15 minutes to go Ian Parkhill should have sewn the points up but he fired wide when he should have hit the target. In the 87th minute, Parkhill’s cross gave Tuffey something to worry about as the Glenavon keeper was forced to get a hand to the ball as it looked to be dipping just under the bar.

In stoppage time, the Glenavon keeper came up for a corner and possibly got his head to Hall’s free kick but Coleraine played the ball out and but for a timely intervention by Turner, with Tuffey stranded up field, it could have resulted in a third goal for the visitors.