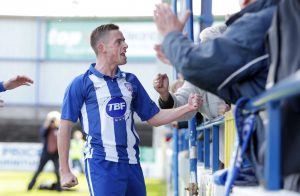 Paul Owens’ switch from Carrick to Coleraine has transformed his career.

The striker scored a memorable double — both direct from corners — to send the buoyant Bannsiders into Saturday’s IRN-BRU League Cup final against Crusaders on the back of an impressive 13-match unbeaten run.

Glenavon fans must be sick of the sight of him, though. Earlier this season, the 29-year-old knocked in a 35-yard screamer to give Carrick victory at Mourneview Park and after coming off the bench to save the day against amateurs Larne Tech OB on his debut last weekend, Owens has already established himself as a fans favourite.

“It’s been a great move for Paul. His performance against Larne Tech Old Boys was instrumental in us salvaging a place in the next round when all looked lost,” said boss Oran Kearney.

“The emotion in the ground when we scored our third goal to win was incredible. He more than justified a start against Glenavon and he made the most of that opportunity.

“His two goals were incredible and again his first put us back on track after we were behind.”

They say lightening doesn’t strike twice, but try telling that to Owens.

With a favourable wind, the winger — whose side trailed to a fine Brian McCaul strike — twice out-smarted veteran Glenavon keeper Davy O’Hare either side of Aaron Canning smashing home his first goal for the club.