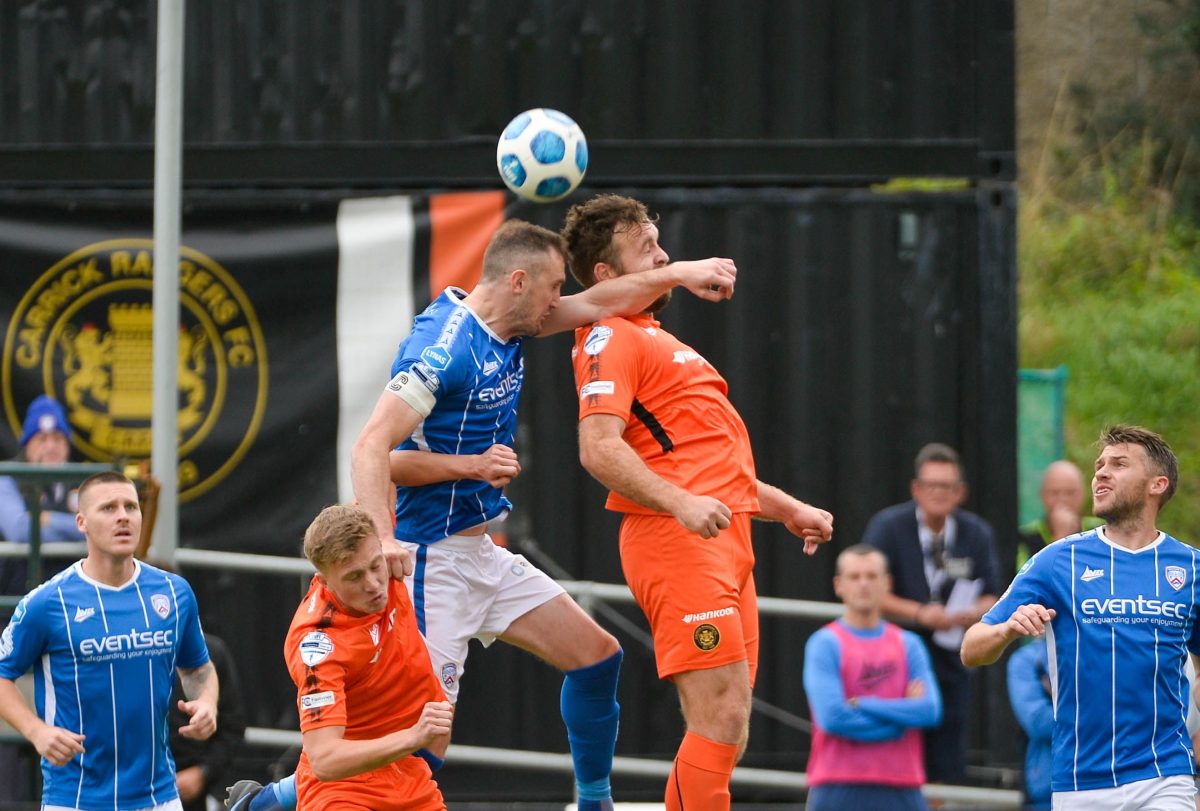 COLERAINE picked up their first win of the season as Matthew Shevlin’s brace helped the Bannsiders to a 3-0 success against Carrick Rangers.

Boss Oran Kearney made two changes to his starting line-up as Josh Carson and Eoin Bradley were restored to the starting eleven at the expense of Aaron Jarvis and Evan Tweed.

The visitors started on the front foot as Matthew Shevlin headed wide from Jamie Glackin’s corner kick, with Carrick almost taking the lead through a familiar source as Mark Surgenor’s strike was diverted goalwards by Emmett McGuckin but the ball whistled inches wide.

However, the deadlock was broken on 12 minutes as the Bannsiders took the lead in spectacular fashion. A cross into the box by Conor McKendry inadvertently turned into a shot which dipped over Neil Shields and into the back of the net as the winger celebrated his first goal since his summer switch to The Showgrounds.

Seven minutes later, Coleraine thought they had doubled their advantage as a ball into the box by Jamie Glackin met the head of Stephen Lowry but the midfielder would be denied by the linesman’s flag for offside. The lively McKendry would once again have a sight of goal as he forced Shields to turn his near post effort around the post.

Just after the half hour mark, Stuart King’s side would be reduced to ten men as Eoin Bradley’s flick on found the run of Shevlin. The energetic striker would burst clear but was brought down by Jim Ervin who was given his marching orders by referee Tony Clarke.

Coleraine would see the half out without any real scares with a free-kick by Bradley at the other end going inches wide of the far post.

The Bannsiders would make a superb start to the second-half as they went two goals ahead on 48 minutes. The ball was released to Lyndon Kane on the right-hand side and his cross was missed by Surgenor which allowed Shevlin to arrow an unstoppable strike into the bottom corner.

Stuart King would bring on three players in a bid to get back into the contest but half chances through Kyle Cherry and Daniel Kelly failed to materialise as Coleraine almost extended their lead on 71 minutes as a sublime cross field pass by Bradley found McKendry. The ex-Larne man looked up and found Glackin outside the box but his daisy cutter was easily gathered by Shields.

On 74 minutes, the away support had a third goal to celebrate as McKendry and Kane linked-up down the right-hand side to feed the ball into the path of Bradley. The striker looked up and sent a wonderful cross with the outside of his boot inside the area and Shevlin was on hand to prod the ball home.

Coleraine gave a first-team debut to midfielder Patrick Kelly and the teenager almost made it an afternoon to remember as he was sent clean through on goal but was thwarted by Shields on two occasions as the Bannsiders ran out comfortable winners.