The Bannsiders will have a team compete in both the Minor and Junior sections of the competition, whilst other Coleraine players will represent County Londonderry and County Antrim.

Q1. How excited are you for the tournament? Do you think the players are as equally as excited?

The other coaches and I are really looking forward to be part of the SuperCupNI and proud to be taking a Coleraine FC Youths team into a youth football tournament with the reputation of being the best in Europe.

There is a great buzz around the squad and all the players can’t wait for the tournament to begin. Like any young player when they reminisce in later years about playing in the Milk Cup as it was previously known, now SuperCupNI, it is definitely going to be a highlight of their football journey.

Q2. How important is it to test the players at this level? What do you make of your group and the fixtures?

We feel that the tournament provides many opportunities for these young players and it will be a big test for the team. For us it’s all about trying to replicate a level of professionalism to give the players a great football experience over the week but also try to find that balance so they can soak up the atmosphere, make memories and enjoy everything else that the week has to offer.

All the groups are tough and they will be coming up against some of the best talent in the country. We know of Larne and Linfield but we haven’t played Finn Harps to date so it will be nice for the boys to play a new team.

It would be great if we meet a couple of teams from outside Northern Ireland in the later stages and I suppose the want to play team for everyone would be Leicester City. I’m sure the boys will rise to the occasion and give a good account of themselves but ultimately, we want them to enjoy their football regardless of results.

Q3. How have the players prepared for the tournament? You are probably indebted to support from sponsors and parents?

We have been working with the players over the past 10 weeks and in addition to normal training, friendlies and S&C we have benefited from using the club’s GPS vests and game analysis technology. You can really see the difference in development when you increase contact time for the players which is a real positive from the preparation leading up to the tournament.

Q1. How excited are you for the tournament? Do you think the players are as equally as excited?

I am looking forward to the tournament especially as the boys were supposed to go the last two years and didn’t get because of COVID-19.

The players are very excited about it and looking forward to it.

Q2. How important is it to test the players at this level? What do you make of your group and the fixtures?

I feel it is very important the boys are exposed to this level of football competition to test them and also to let them see the standards they must achieve to succeed.

It is a good challenge for them and they will benefit greatly from it. We have a tough group with Linfield who won the NIBFA League and Cup in our age group this year.

We know them and it will be a tough game, Newcastle we know nothing about but I expect them to have quality. Portadown completes our group and that game should be another tough one for us.

Q3. How have the players prepared for the tournament? You are probably indebted to support from sponsors and parents?

We have trained twice a week with a game on Saturday’s and have had only two weeks off since last August.  I don’t think the boys have ever been as fit as we have worked exceptionally hard on fitness.

I spoke to Oran about how he prepares pre season fitness programmes and we used it tailored for the boys’ age and physique.

To fund participation in the SuperCup NI, the boys raised a considerable amount themselves through sponsorship and collections. Eventsec, Gleam Cleaning Company, Better Bedrooms & Kitchens, Kingsbridge Private Hospital, Digital Screen Displays and Spirit of 74 have all been very generous with their sponsorship which has been really appreciated.

We have the squad kitted out in Nike kit the new kit supplier to the club and the boys look very smart in their kit. We would also like to thank the Coleraine FC Youth Committee who has paid the entry fees to the competition.

I have said to the boys to enjoy the experience. I am not concerned about the results; so long as they give of their best we will be satisfied with that. 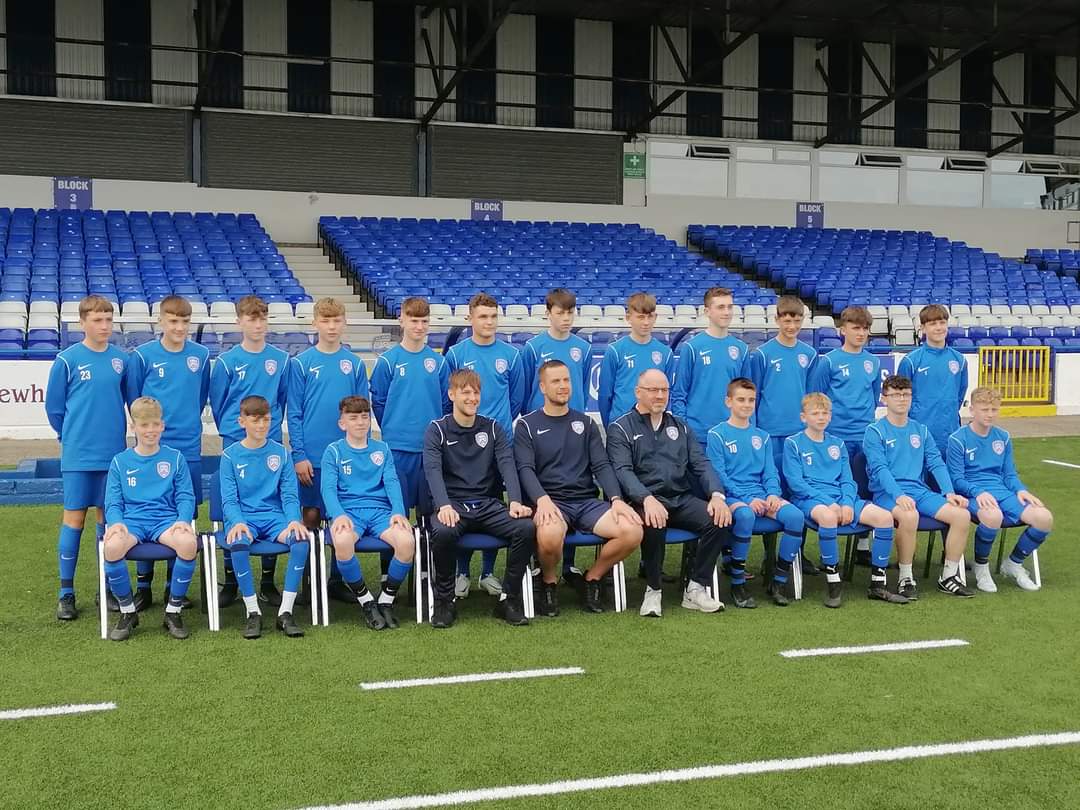