The Bannsiders finalised their pre-season schedule in fine style as split squads would earn victories against Glebe Rangers (6-2) and Coagh United (4-2). Before a ball was kicked, Coleraine would land their first summer signing as Emmett McGuckin joined from Dergview, with Jamie McGonigle making the switch to Crusaders for an undisclosed fee.

Coleraine would have home advantage for the opening day of the season as Cliftonville were the visitors to the Ballycastle Road. After a goalless first-half, Coleraine would hit the front after the break as Eoin Bradley directed Ben Doherty’s cross into the net. Just as it looked like the Stripes would hold on to a valuable three points, the Reds would earn a share of the spoils as Joe Gormley powered home from close range.

Coleraine held a 2-0 advantage at The Oval but were unable to register all three points.

Three days later, Oran Kearney’s men would be on their travels for the first time in the campaign as they made the trip to East Belfast to take on Glentoran. Things looked to be plain sailing for the Bannsiders as they led through goals from Aaron Canning and Eoin Bradley, but the game changed on its head when James McLaughlin was sent off for a foul on Patrick McClean. Following that dismissal, the Glens would reduce the deficit through Hrvoje Plum’s free-kick, before Paul O’Neill fired home a late equaliser.

A busy opening week of the season would see Coleraine visit Windsor Park and record their first win of the campaign. The clock was barely 14 seconds old when Ben Doherty curled home a delightful effort, before Ryan McGivern scored an own goal to double the Bannsiders’ advantage. After the break, the lead was added as Stephen O’Donnell headed in, but Linfield responded and scored twice in as many minutes through Joel Cooper and Shayne Lavery. However – after McGivern was dismissed for a second bookable offence – the result was put beyond doubt when Emmett McGuckin marked his debut by adding a fourth.

Before Coleraine welcomed Institute to The Showgrounds, there was a departure to the squad as Aaron Burns left the club via mutual consent. On the pitch, it would prove to be a frustrating day for the Stripes as they failed to find the target and had Eoin Bradley sent-off for an off-the-ball incident in the first-half as the fixture ended in a goalless draw.

The action kept coming as Coleraine were drawn to face Annagh United in the second round of the BetMcLean League Cup. After a quiet opening to the match, the deadlock was broken late in the first-half as Ben Doherty dispatched a spot kick, before the Bannsiders added their name in the third round draw through a hat-trick from Ian Parkhill. Later that week, Coleraine boss Oran Kearney swooped in the transfer window to land Nedas Maciulaitis from Annagh United, goalkeeper Martin Gallagher and long-term target Aaron Jarvis both from Institute, with Graham Crown moving in the other direction.

The month finished with a tricky away fixture at Glenavon and goals either side of half-time from Stephen Lowry would put the Bannsiders in the driving seat, before the three points were completed through a penalty from Ben Doherty and a goal on his debut from Nedas Maciulaitis. Before the transfer window shut, midfielders Dean Shiels and Cormac Burke were allowed to depart the club. 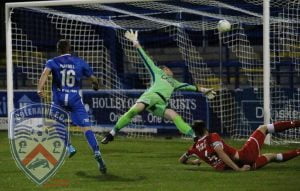 Ian Parkhill completes his hat-trick against Annagh United in the second round of the BetMcLean League Cup.