Coleraine will be looking to gain some momentum before next weekend’s Charity Shield final against Linfield as they clash against North-West neighbours Portstewart at Seahaven this evening. It is expected to be a youthful squad as boss Oran Kearney faces a pre-season injury crisis.

The Club will be hosting a ‘Family Fun Day’ with bouncy castles, music and much more. The official club shop will be opened around midday, with season tickets also being on sale with a fantastic 50% rebate offer. 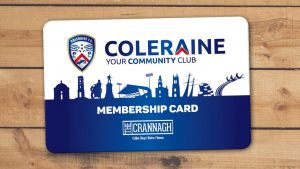 Club season tickets will be on sale tomorrow from midday.

As ever, those unable to attend both games can follow the latest developments on the club’s official Twitter page (@ColeraineFC).