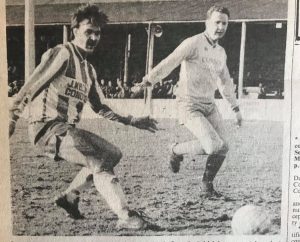 Tom Sloan was one of the happiest men at The Showgrounds following this narrow victory over Matt Bradley’s struggling side.

The midfielder has not had the best of times since moving from Carrick Rangers, but against the border club, he produced one of his better performances.

And to top everything off nicely, he scored his first goal since the transfer from Taylor’s Avenue, keeping his cool to give the Bannsiders a two goal lead.

“He has taken a bit of stick from the fans and hopefully now they will get off his back and give him the chance to prove his worth,” said manager Jim Platt.

“He took the goal well, and then did a good job when he moved into right-back after Ronnie McDowell went off injured,” added the big ‘keeper who felt his side were far superior, despite reports in weekend newspapers.

“I read were Newry had the better chances and they were unlucky not to have won but I thought we were always in control and gave them their goals through bad mistakes.”

Coleraine should have been cruising to victory after leading 2-0, but in the end they had to battle for the points.

Gerry Mullan broke the deadlock after half an hour when he beat Brian O’Shea with a flick header from Raymond McCoy’s corner.

Then, one minute into the second period, Barry McCreadie’s pass found Sloan in space and he calmly rounded the ‘keeper and slotted home before being congratulated by his team-mates.

Newry responded after 56 minutes when Gerry McDonald put Ollie Ralph clear and he made the most of the opportunity with a shot placed out of the reach of Platt.

The goal sparked Coleraine into life and they regained their two goal advantage as Mullan once again showed his goalscoring instinct.

He combined well with McCreadie, collected a pass, and planted a firm drive wide of O’Shea into the far corner.

But Newry were allowed back into the again and with five minutes remaining they reduced the arrears, Tommy Gray heading home Eddie Patterson’s corner.

“Gray should have been picked up and because I committed myself, he had a free header, but as long as we collected the three points, then that is the main thing,” claimed Platt.