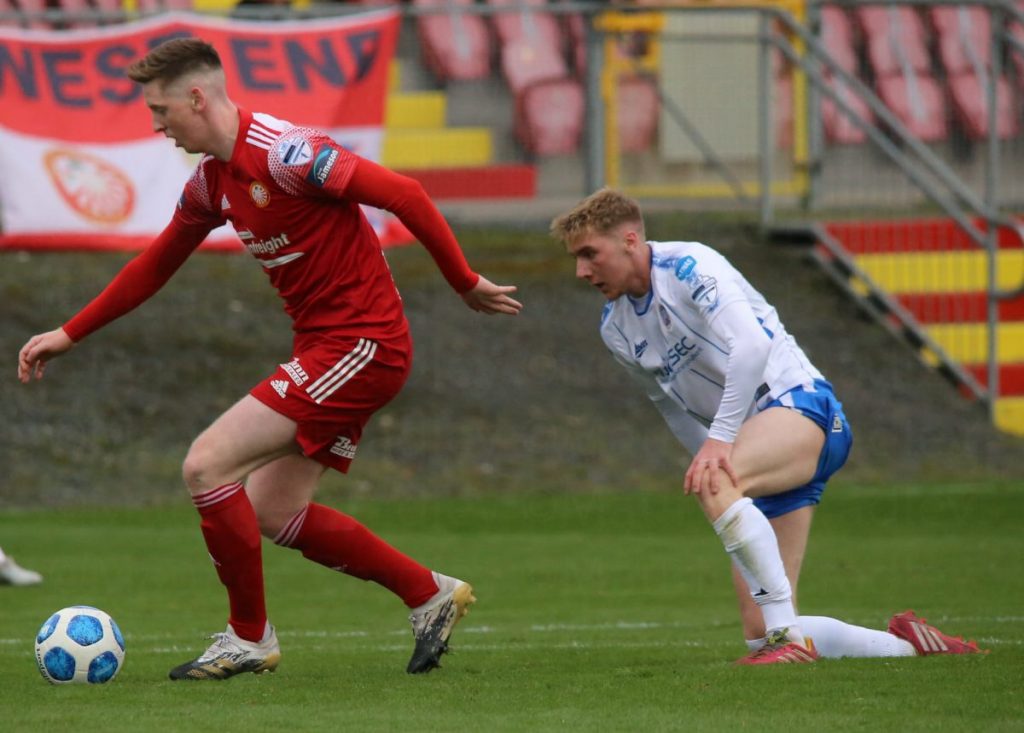 COLERAINE secured their first win of the 2020/21 campaign as they scored three times in a routine win at Shamrock Park.

The Bannsiders named an unchanged line-up from the team who lost against Ballymena United on the opening day of the season and they made a bright start as Gareth McConaghie’s free-kick found James McLaughlin but the striker was denied by an excellent save from Benjamin Pierce.

Oran Kearney’s men would be rewarded for their quick to start to proceedings as Keith Kennedy pointed to the spot after Greg Hall was adjudged to have handled inside the box. After seeing his penalty saved by Pierce, the alert Ben Doherty was on hand to fire home the rebound on eight minutes.

In a competitive opening 20 minutes, there would be a dismissal as Portadown manager Matthew Tipton was sent to the stands following an altercation with with referee Kennedy. On 27 minutes, Coleraine would threaten again as Stephen Lowry played a delightful ball out to Doherty on the left-hand side but the midfielder was unable to find the target.

Just after the half hour mark, the Stripes thought they had doubled their advantage as James McLaughlin had a strike deflected over the crossbar, before Stephen O’Donnell’s header from the resulting corner was cleared off the line by Chris Lavery.

In a similar fashion to the first-half, Coleraine would make a bright start to the second 45 minutes as they doubled their lead through Jamie Glackin. A corner found its way to the attacker inside the box – and with his back to goal – the ex Dungannon Swifts man was able to turn and convert from close range.

The visitors were starting to turn the screw and only a timely intervention from Portadown captain Paddy McNally stopped McLaughlin from adding a third, with Ports stopper Pierce once again called into action to save from O’Donnell’s header.

However, things went from bad to worse for the hosts on 64 minutes as striker Lee Bonis was dismissed for a second bookable offence. Two minutes later, Coleraine almost made their extra count as Stewart Nixon rattled the crossbar from 25 yards.

In a late flurry, Portadown almost grabbed a lifeline as Gareth Deane dived down to his right to prevent George Tipton’s strike from finding the bottom corner. A minute later, Deane would prove his worth once again as he clawed away Conall McGrandles’ header.

The three points were secured on 89 minutes as a cross from the left by Josh Carson wasn’t cleared and the ball landed at the feet of McLaughlin who steered home from 12 yards. At the death, Portadown nearly scored a consolation goal as Stephen Murray’s effort smashed the crossbar.