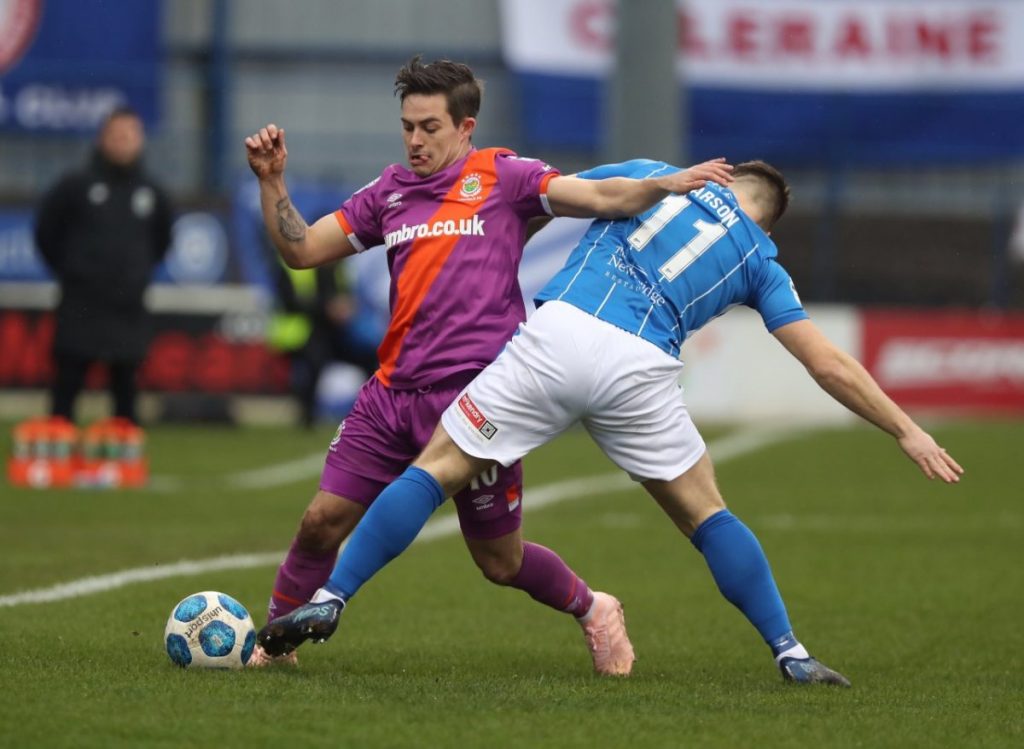 COLERAINE suffered a second successive defeat as a goal in each half gave Linfield all three points at The Showgrounds.

Oran Kearney made one change to his starting line-up as Aaron Jarvis made his first start in the Premiership at the expense of Curtis Allen who was dropped to the bench.

After surviving early corners from the visitors, the first chance would arrive on 16 minutes as Andrew Waterworth powered his way into the box but he failed to hit his effort on target. Three minutes later, Jordan Stewart took a neat touch and released the run of Niall Quinn but the midfielder’s strike was straight into the arms of Gareth Deane.

On the half hour mark, David Healy’s men threatened with Quinn, Waterworth and Stephen Fallon all having goal bound efforts blocked. However, two minutes later, Linfield’s pressure paid off as a defensive mistake from Lyndon Kane was pounced upon by Quinn and he crossed for Waterworth who couldn’t miss from close range.

There was almost a further blow for the Bannsiders on 41 minutes as Quinn once again found Waterworth inside the box but the marksman would be denied a second via the lineman’s flag.

Coleraine started the second-half brightly and almost found an equaliser straight from the restart as Jamie Glackin’s cross found Ben Doherty at the back post but he drilled his effort into the arms of Chris Johns.

That miss would prove to be costly as Linfield doubled their lead two minutes later as a long ball over the top wasn’t dealt with by Stephen O’Donnell and Jordan Stewart evaded two challenges before striking the ball into the net.

Coleraine needed a quick response and they should have reduced the arrears on 52 minutes as a cross from Bradley met Doherty but the Stripes’ top scorer blasted over the bar from close range. A few minutes later, the ball found its way to Josh Carson in an attacking position but his strike was blocked by the legs of Conor Pepper.

Linfield chased a killer third goal and it almost arrived on 76 minutes as a strong run and strike from Fallon forced Deane into a smart save, before the shot stopper was called into action to deny the same player from distance two minutes later as Linfeld cruised to victory.