The L/Derry man came through the ranks at the club before making his debut at the end of the 1991/92 season.

In total, Philson made a total of 62 appearances, scoring once in the process.

Philson would return home and spend time on the books at Linfield but has fond memories of a spell with Institute  and revealed to Jonathan McNabb that his style of play wouldn’t suit the modern game.

Q1. Graeme – talk us through your youth career? Who did you play for and were you always a defender?

I started playing for Fulton Rovers at eight-years-old, who were a Waterside team playing in the Derry and District under-11 youth league. My primary school was too small to have a school team so that was my first taste of competitive football.

Like every young boy in the 80’s I played football on the streets morning, noon and night. I was football mad. Initially I was a right winger as I was quite slight. From there I played for Ashfield, Foyle Harps and Tristar up to under 14 level.

I was recommended to Coleraine at 14-years-old by my mates father Jim Arbuckle who was scouting in the Londonderry area and spent a short time there under Frankie Moffatt, though I felt I was a bit young for the under 18’s before moving to Institute youths under Paul Kee for a season.

It was after the Milk Cup tournament in 1991 when I represented Coleraine that things started to progress. I played in a decent Coleraine team managed by Raymond Starrett in midfield with the likes of Stephen McDowell and Rory Hamill. After that it was the Coleraine youth, reserves and first team set up.

Q2. Made your debut for Coleraine at the age of 16 – can you remember much about it? It’s fair to say you had a few managers during your stint at The Showgrounds?

Yes I remember my initial debut was against Ballymena United as a substitute at The Showgrounds, though my full debut was against Crusaders on the last day of that season at Seaview marking Kirk Hunter. Victor Hunter was the temporary manager. We lost 4-1.

I remember clattering Kirk Hunter in a tackle and him landing on top of me. I was expecting a ‘dig in the gub’. Next thing I felt was being hauled up by my shirt collar and getting a big slap on the back. Hunter had me by the scruff and said ‘well in wee man…love it!’. I think he respected the fact that at 16 – I was both game enough and man enough – to mix it with him as his reputation was notorious.

After that game everything seemed to click for me. I got what first team football was all about, the need to be physical, determined, communicate and take the rough with the smooth. 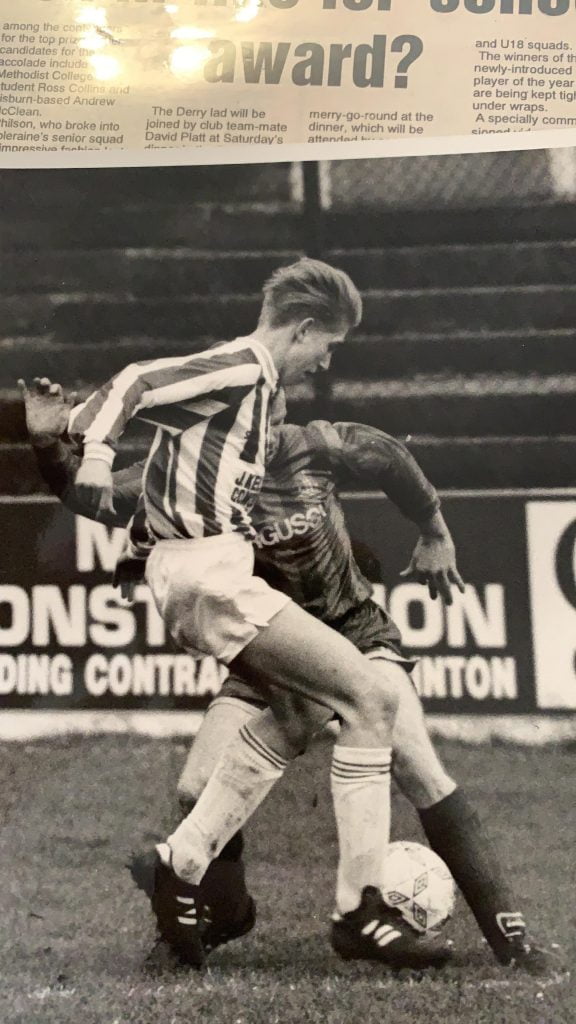 Q3. You joined West Ham at the age of 20 – must have been a proud day for you? Michael Carrick was your boot boy? Did you play with any household names?

West Ham was a dream come true. I had been on two hush hush trials prior to signing for them. I almost got offered a contract at Spurs and had a successful trial at Ipswich. I was due to go back there.

Ironically the West Ham trial came just as I’d lost my first team place. The scout who sent me to Spurs Robbie Walker had moved to West Ham and thought I’d a great chance of getting a contract. Coleraine were happy to let me go on trial as I wasn’t in the starting eleven.

I went over gave it a bash and luckily I did really well. I played against Bradley Allen and Les Ferdinand in my trial match as both were recovering from injury and getting game time. We won 1:0 and I did really well.

I played with a lot of top players when I was at the club. Peter Shilton was playing for the reserves as was Alvin Martin. I played with Paolo Futre, Florin Raduciou and Illie Dumitrescu. We were lighting up the foreign transfer market back then, plus we had all the Northern Ireland contingent of Dowie, Lomas, Hughes, Rowland and Grant McCann.

Q4. Returned back home to Linfield – but it just didn’t work out? Any regrets?

I came back to Linfield initially on loan and it was all a bit of a whirlwind. I was at Wigan on loan at the time when Harry Redknapp told me Linfield wanted to take me on loan for the last few months of the season. It was a chance for me to come home to see family as I’d became quite homesick. London is a difficult place to settle for anyone.

I eventually signed permanently for the Blues. I’d be the first to admit I struggled there. I broke my ankle in my first game versus Bangor and then was out until Christmas. I struggled for form and like any footballer when your confidence is low it can really drain you.

I got a lifeline when Institute came in for me. Going to my hometown club meant a fresh challenge, a chance to rebuild my confidence and most importantly get back to enjoying my football.

Q5. You signed for Institute your hometown club and played over 200 games – was that the happiest time of your career?

Paul Kee brought me to Institute and gave me the opportunity to enjoy my football again. Once things got going I loved it. He had a cracking squad of local players and we made great strides. Within three seasons we were promoted to the Premier League.

Q6. Do you watch much IL football now? Do you think the standard is as good as it was when you played?

I still follow the Irish League and look out for Coleraine and Institute’s results.

Football now is very different and a lot of the physicality has been removed. I probably would struggle to stay on the pitch these days as tackling has more or less been outlawed.

I have no doubt the quality is still good but I think the teams in my day were stronger and the league was more competitive. We had cracking Linfield, Glentoran, Portadown, Glenavon and Crusaders teams. For me the physical nature and competitiveness made the league better to watch. 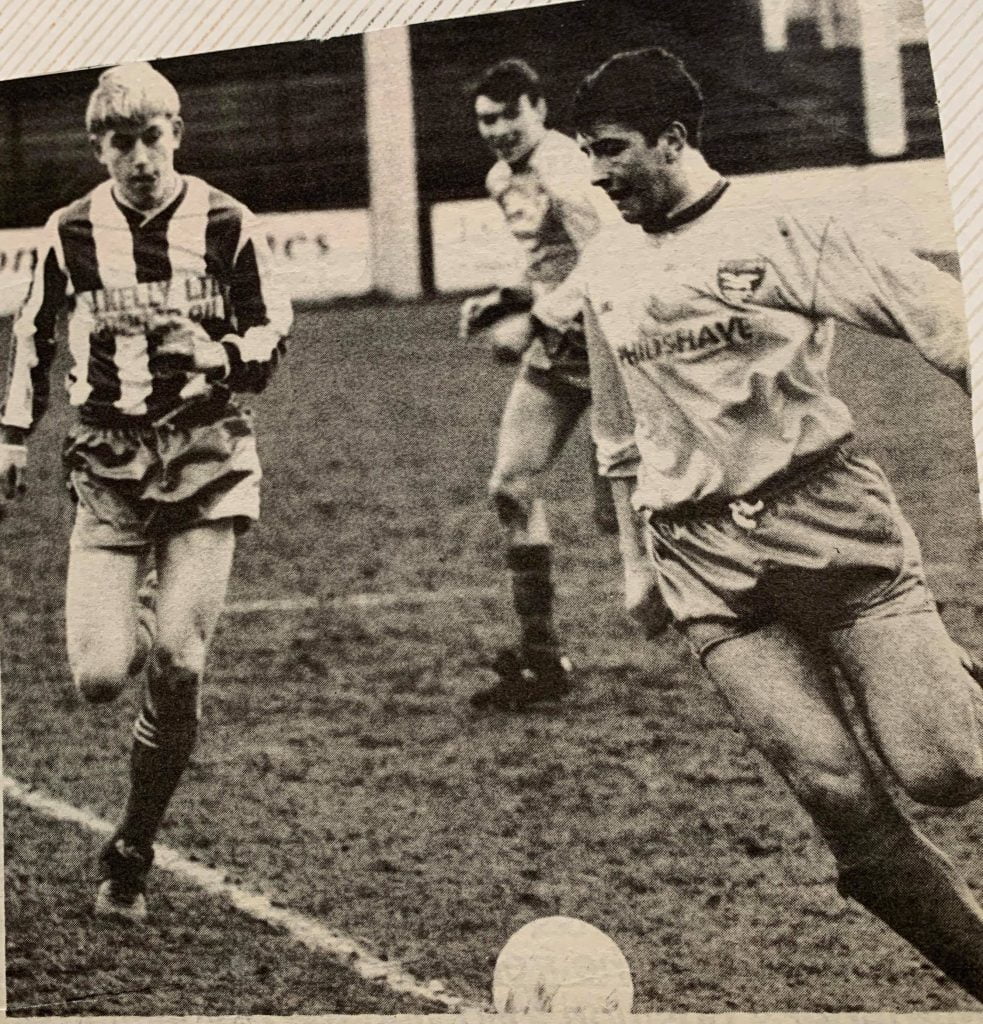 Q7. Finally, any funny stories from your time at Coleraine?

I have a few cracker Jonny McIvor stories as we both travelled together during the early 90’s from Londonderry. During a derby match away to Ballymena, Felix arranged for the team to have a pre-match meal at the Fort Royal on route to Warden Street.

The team hadn’t been named yet so the whole squad were all tucking into our breakfast of scrambled eggs, beans and toast not knowing who was playing. Felix had taken a squad of 20 players so places were up for grabs and obviously players would miss out.

Jonny loved his grub and he was taking full advantage of any extra helpings that were available. Every time the waitress went past he grabbed her for more toast, a few scoops of beans and even cheekily asked if she had any grated cheese. He just kept going and going and going.

I said to him ‘Jesus Jonny you can eat’ to which he replied ‘sir it’s free and I’m starving, anyway I’ll not be playing it’s a massive squad’.

I presumed Jonny had prior information and I think he thought that he’d only be on the bench at best. We all finished our grub and listened attentively as Felix ran through the team. Jonny looked like a busted sofa and had an almighty grin on his face. That grin soon disappeared when Felix said ‘right wing Jonny McIvor’.

Next thing Jonny chirped up ‘Hi Felix I’ve eaten too much breakfast sir I canny run, you need to stick me on the bench.’ Felix looked understandably bemused and I have to admit there were a few silent chuckles. First player I’ve ever seen fail a fitness test eating his breakfast.